Next week we’re excited to have two speakers presenting about maritime simulation in Gazebo Sim!

Rhys Mainwaring (@srmainwaring)'s presentation reviews a set of plugins for simulating ocean waves in Gazebo and adding buoyancy and hydrodynamics physics to models so they respond to a dynamic ocean surface.

The original plugins targeted Gazebo 11 and supported trochoid waves. The most recent version has been upgraded to support the Ogre2 render engine running on Gazebo Garden and uses the FFT wave generation methods developed by Jerry Tessendorf for films and later adopted in various form by the game industry. The method used for buoyancy and hydrodynamics is based on a set of articles by Jacques Kerner’s two part blog describing his teams approach when developing water physics for the game Just Cause 3.

The main contribution here is applying the methods to Gazebo; keeping the physics on the server and the client visuals synchronized; migrating everything to Gazebo’s new render system and supporting macOS as well as Linux.

The simulation is applied to variety of vehicle types including sailing and powered surface vehicles, submersibles, and buoys.

Conducting oceanographic research at scale, over long periods of time, and with sufficient resolution can be challenging and cost prohibitive. Long range autonomous underwater vehicles play a prominent role in these scientific endeavors, allowing unattended, uninterrupted data acquisition over the span of weeks, covering hundreds of kilometers – even simultaneously if multiple vehicles are deployed. This, however, shifts complexity and cost from operations to engineering: developing a reliable fleet of LRAUVs is a feat on its own.

The Monterey Bay Aquarium Research Institute (mbari.org) and Open Robotics have been in close collaboration for over a year, building an open-source multi-LRAUV simulation environment on top of Gazebo Sim to streamline MBARI’s own R&D on LRAUVs and to contribute to the larger maritime robotics community.

During this meeting, Michel Hidalgo (@hidmic) will present the multi-LRAUV simulation environment and highlight some of its most interesting capabilities. 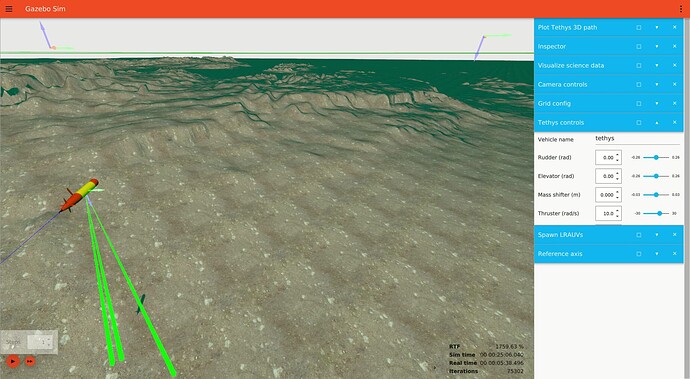 Agenda: Everyone is welcome to add items to the agenda.

As always, the meeting will be recorded and posted to the community meetings playlist on the GazeboSim YouTube channel. Check out the playlist for past meetings!

Are you doing anything interesting with Gazebo? Show it off to the community! Send me a private message so we can figure out the best date.

Do you want to see some specific topic covered? Please comment below!